This proposal is a description for the initial functionality of the Jet platform, processes around it and voting mechanics. It is expected that the readers are familiar with Aurora staking proposal.

As it was stated by the DAO previously, 200M AURORA tokens are devoted to the community treasury. AURORA token holders should be able to decide on the distribution of these tokens to the initiatives and projects that are planning to launch on Aurora. To simplify the interaction with this treasury, Jet platform is developed. Currently (30-Dec-2021) Jet is under development and ready for around 20%, so there are many flows that can be shown, although mechanics can be updated or added.

Note: from the previous DAO voting it was clear that the platform should be created, so Aurora Labs commenced the development

The basic idea is to reuse the mechanics of the crowdfunding platforms, like Kickstarter. However, since users are not transferring their AURORA tokens to the projects, but voting on the distribution from the community treasury it was decided to introduce periodicity in the allocations. So, Jet is operated within seasons. Each season is a complete cycle of applications - voting - distribution of the community grants. A season lasts approx. 2 months, application and voting phases lasting around 1 month each. Season mechanics is tightly coupled with AURORA staking.

There are three main roles for people interacting with Jet:

Curators exist to simplify project and user journeys within Jet platform. Their goal is to handhold projects during the process of application and updating the statuses; and help users to obtain relevant information about the projects. Curators also responsible for providing aggregated information about seasons and winning/loosing projects; producing educational materials.

The projects’ application should consist of substantial amount of information:

To support thoughtful applications, grants from community treasury should have the bucket structure with different purposes. Each bucket has a weighting coefficient that is applied to calculate for the total cost of the project. Some of the buckets may be allocated in NEAR tokens through the partnership with NEAR Foundation or Proximity Labs.

Let’s consider an example of the project requesting funding and the calculation of the weighted size of the grant.

The project was just born on the hackathon and it requires some additional work till release of the main features. The project team proposes one milestone (3 months for development) and splits the grant into two parts: first focused on the finalisation of the development and second—on the rollout.

The described grant structure though is a complication comparing to the conventional approach, makes the goal of the decentralised ecosystem building much closer: projects spend a bit of additional time thinking through the actual budget; and the users are able to understand how the project would use the allocated funds.

Depending on the total weighted budget of the project and the voting results the decision is made on financing the project.

The allocation of the funding from the community treasury to the projects is dependant on the percentage of the VOTEs allocated by the users to the specific project.

Let’s consider this rule in detail on the following example:

Imagine the community treasury allocating weighted $1M for the grants in the current season. Also, there are only three projects that have applied and were approved by curators. Besides that there are 6600 VOTE tokens used for voting (with accounting for the decay of vote tokens, see AURORA staking).

NOTE: Depending on the actual budget structure of projects 2 and 3, the actual amount of money allocated to the project may differ from 200 and 500 thousands USD.

NOTE: Within this example, projects totally requested more than it was allocated to the season. Thus, the limit of the available funding introduces the natural competition between projects, which improves the quality of the projects.

At it was said earlier, after each milestone the project should report their progress to the community. Project submits a draft report to the curators and together with them a validation of the report is done. Based on the report, curators are assessing the KPIs and assigning the scores. In case the mean score of the KPIs is less than 30%, the funding of the project ends. KPI results of the project influence the user rewards (see below).

Late submissions of the report are treated as the breach of the obligations in front of the community and means immediate halt of the funding (and, potentially blacklisting of the respective stream).

The active participation of the users is required only on the voting phase. During this phase it is expected that users will do the research of the projects, approved by the moderators, and vote for those projects, which they seem the most relevant for the development of the Aurora ecosystem.

To make the approach more understandable, let’s get back to the example of voting results calculation. Let’s also assume that for this season there are $100k allocated for user rewards. Let’s see how these would be distributed among the users.

NOTE: in case the project has multiple milestones, conditional rewards are distributed pro rata weighted budget for the milestones.

There are multiple mechanics in the approach above: 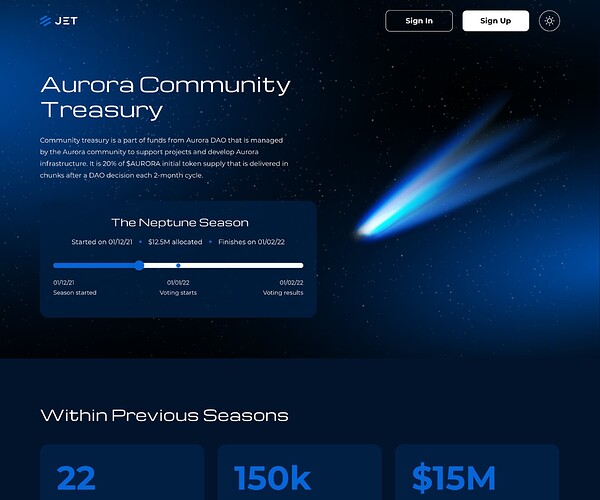 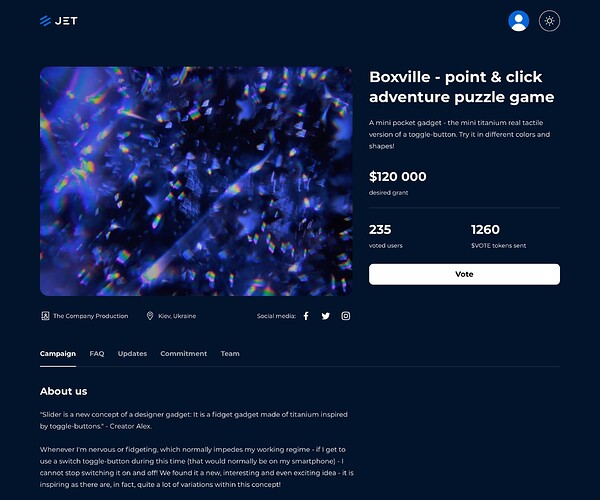 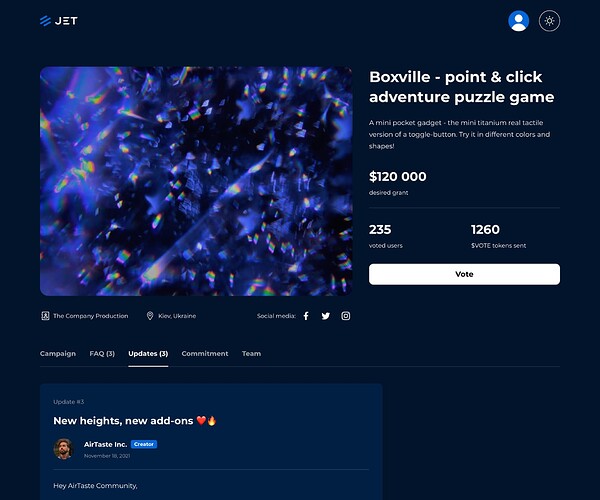 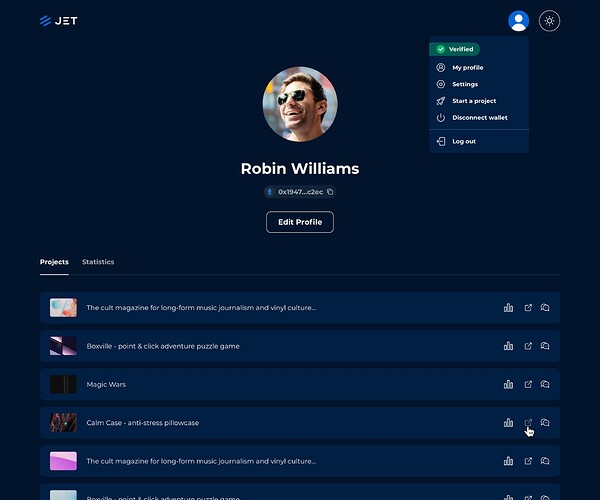 I read your full articles (both this one and the staking aurora) and have couple of things that havent clear yet. I hope you will notice this and explain for me please.

In the grant stucture, i do not understand the “weight coefficient” that you mention. What is this number affect to the fund, and does this number is from the staking of AURORA that written in the AURORA staking article?

No, this is a separate thing. The weighting coefficient is described in the Grant structure part. The idea behind it is money for different purposes have different costs. If a project just needs some liquidity to kickstart, then this liquidity should be withdrawn in some time, so this money cost less.

In the example of grant structure, i dont know how to calculate the weighted budget, can you explain more.

There are 5 points in the grant structure. Just multiply each on the coefficient and add everything together. For the pre-payment the calculation is the following:

In the example of user flow, i read that assume we have $100k for reward, so these rewards are also from the community treasury right?

Yes. This is up for the future decisions what would be the split of the community treasury between user incentives and grants, but let’s keep this as a separate topic. I believe there’re other things that will also be included in these 20% of the token supply, like the cost of the development of the platform.

thanks for the information. to the moon

Hello thank you sers for the great beautiful prototype and strong info on the treasury. I was wondering if adding a mechanism to require holders of the VOTE token to be actively engaged in the AURORA staking contract to vote on proposals/grants could be useful? I believe there could be risks from users/projects who stake AURORA just to gain votes for influence on a project they like or may be apart of and if the vote does not go as they planned they may unstake AURORA taking their votes/power with them and that could lead to them sabotaging other proposals without them actively staking . I believe this would overall just add more utility for staking and the AURORA token so users do not just stake to gain votes and then leave once they get the amount they are looking for.

Thanks for the suggestion, @xo30fb .

IMO, punishments are a bit worse incentive rather then pure positive incentives for the active community.

In case people don’t want to take part in the voting, no problem: they might be too busy. According to staking proposal their VOTEs would just decay and they would be able to influence nothing. Moreover, as it said in the collecting stats section, the staking contract will collect the info on the used redeemed and used VOTE tokens. These numbers might play a role in the future governance depending on the DAO decisions.

Just as an example, if the decentalization of the governance proposal will pass, the DAO would need to decide on the weighting formula for the DAO council elections. And it might be something like:

The above formula is embracing the value that is provided to the Aurora community of the users that are active.

Also, there are no formulas where the calculations are relative to the total amount of VOTE tokens obtained by AURORA stakers. What matters is only the amount of VOTE tokens that were used for voting for the projects. So, the fact that some people would withdraw AURORA or won’t use VOTE won’t sabotage anything—other votes would just become more valuable.

One more thing i wanna ask about “weight coefficient”. The ratio like 1.5 or 1 or 0.5 is a fixed design number or flexible one? If it is flexible, are there any formula for it? Thank you

It should be fixed for the season. But I expect that after getting some experience with fundings, these coefficients should be updated to incentivise the right behaviour of projects through making it easier for community to determine the real intensions.

How does one apply to become a curator? I have a bunch of experience in running hundreds of hackathons and planing their post-hackathon timelines (such a hard thing to do). Would love to be involved in Jet somehow!

Thanks for sharing this, @Jommi. We’ll publish curator position on Aurora Careers page soon, so that would be the main application path.

Hey there! How can I add application for grant?

Hello @Sonia
Regarding Jet Platform - it will be launched soon.
Meanwhile feel free to use Grow your project on Aurora