My name is Aleida Castillo and here we have a proposal that could help to expand AURORA Worldwide.

Our target audience will be the Hispanic - 559 million, Francophone - 300 million, and Lusophone - 270 million people (at the beginning), which is a significant segment of the total population that gives value to AURORA and NEAR communities.

By opening language borders we offer users to have access to the AURORA Ecosystem Docs in their native languages, facilitating their education and integration into the NEAR Protocol, encouraging them to join our communities, through participation within the ecosystem as developers, holders, builders, or enthusiasts.

Regarding our background as part of Learn Near Club Pro Translators Team and work system (Translator and Proofreading) we can offer high-quality services for this purpose, bringing such great value to Aurora Ecosystem by opening languages borders.

So many times we have found in different Spanish forums the struggle of users with documents in English. That’s the principal reason why this proposal fixes perfectly to Aurora Ecosystem. This will contribute to the easiest approach for users worldwide(onboarding, education, marketing, etc).

Here we have an example where users discuss the language and the solution (Google Translator) is not the best.

It can be measured by evaluating factors such as the increase of participation by communities that make up the target audience, developing among people worldwide, and the level of satisfaction through pools, offering the availability of information in their languages.

Our goal is to integrate more languages ​​into the options already established at Aurora Blog page:

As we have done for the Learn Near Club page. 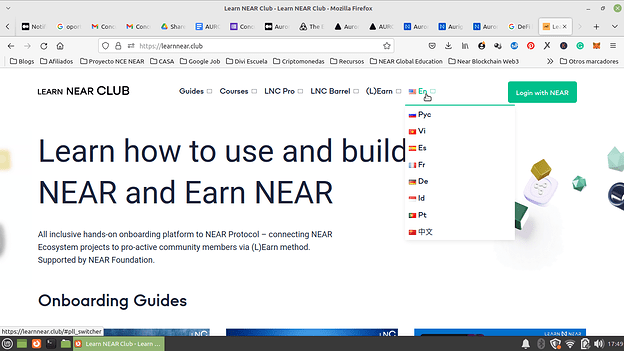 Additionally, we could help translate any subject of your interest, projects, promotions or events, developing content, such as : https://doc.aurora.dev/ , Aurora DAO, AURORA token distribution

To contribute to build solid communities worldwide within AURORA docs, which can be followed by its users in their mother language.

Having present our target audience, the current population and countries available that we can potentially reach are enormous, around 80 countries and territories, covering close to 1 Billion people speaking those languages directly (natives), without counting other people speaking them as a second language.

Tasks and hours of work per Member

What do we expect in a month?

What do we expect in 3 months ?

Work together with your team of content creators to help them to translate every single article they plan to publish.

What do we expect in 6 months?

Based on the experience and previous requests, we consider a funding amount of USD $3,000 per month, which is explained in the following breakdown:

During the last two years, we have met such professional people from Learn Near Club Pro Translators team that in a later stage could join this team in order to add more languages; we have shared ideas and we have developed our translating system that guarantees our job is done right, with proofreading and on time. We are able to offer our services and let Aurora arrive to those for whom the English language is a barrier. We are ready whenever you are ready to begin.

If you have any further questions, please do not hesitate to contact us.

I’m so happy to see them guys!

I really like this proposal, the community needs content in Spanish to understand and explain better how Aurora works that way onboarding is more friendly to both sides.

I am very excited about this proposal @Alecaseg to help make the information more inclusive for developers and end users who want to learn more about Aurora.

Here we have an example where users discuss the language and the solution (Google Translator) is not the best.

In addition to being users, @Alejandrom and I (Julian) are Telegram Moderators for Aurora Venezuela. I love being useful to the community, just as this proposal seeks to cover the needs for knowledge and learning about Aurora and its projects through Spanish, Portuguese, French and English.

Unfortunately we cannot provide you a grant for now.

I would like to know the reason why it was not approved in this period in order to improve the following proposal. Taking into account that it is a need expressed by some users here, how can we make it a better offer to cover such a need?

Hello,
I like this initiative as an idea. I think that one of the reasons why your proposal has been rejected is because the staff of translators that you have integrated is centralized (in part, by region or by language). I think it should be more decentralized.

For example, by starting to be more open, offering a contest to bring together translators from across the Aurora ecosystem. Therefore, to grow as a solid Guild of translators for Aurora including several languages to crosscheck information effectively.