Here is a quick overview of our social:

There wasn’t much going on with Aurora India Twitter, and we’ve been losing a lot of followers. Together, our team identified TGW and modified our approaches. Finally, we can observe that it has begun to give and that the number is increasing. 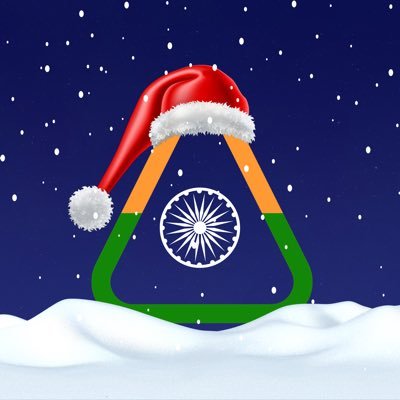 @aurora_india01
🚨 AMA Alert 🚨 Join the space to understand more about the Future of Decentralized #Web3 Domain names and win up to 💵$150 worth of coupons.💰 Rule : - Like, RT - Follow @aurora_india01 x @freenameio - Shoot the best questions in the comment #AURORA #NEAR #NFT #GIVEAWAY https://t.co/DAddkRDv8G 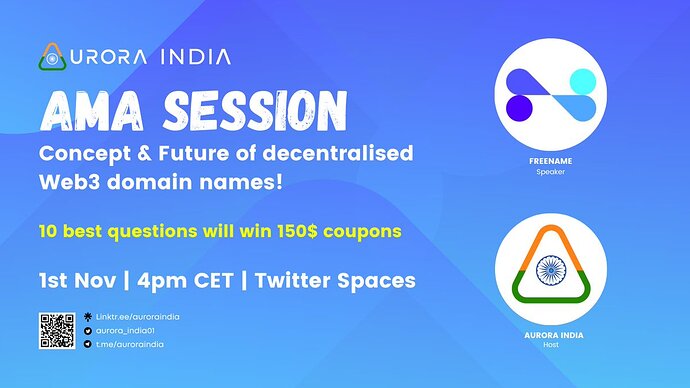 AMA with ShilikaJain - Aurora India hosted an AMA with Shilika Jain as a guest. Shilika Jain who works at Coinmarket Cap had tons of experience in business development shared her thoughts, Insights, tricks to build a successful and healthier community during the bear market.

@aurora_india01
🚨 AMA Alert 🚨 Join the space to understand more about Business Development and Partnerships with the one and only cool and slaying @Shilika_jain. Rewards: 100 $AURORA Rule - Follow @aurora_india01 - Like and RT - Drop the ques below - Join t.me/auroraindia#AURORA https://t.co/Adg8o6dMRd 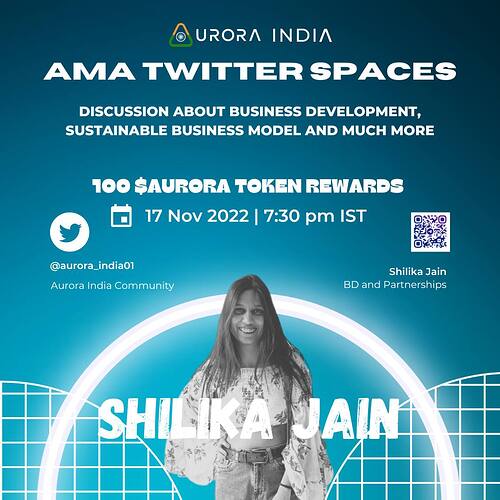 AMA with Knit Finance - The space was really educative in understanding 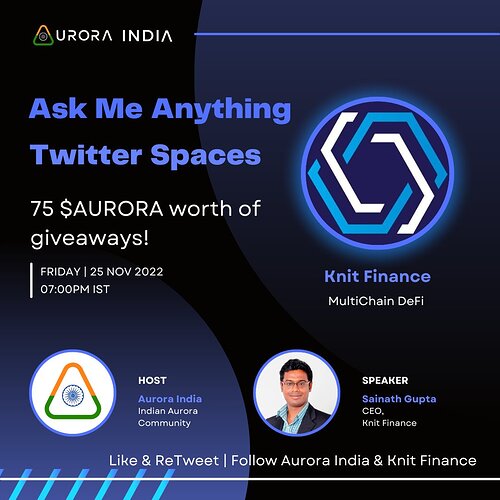 The main motto of this event is to grow the audience parallelly trying to educate the users with the most basic questions. We got a good response and will continue to do the same in the future which creates more traction.

@aurora_india01
🚨 Weekend Quiz Event 🚨 3 Questions on 3 Different days. Answer them all in the comments by tagging 3 of your friends. Q1. Abbreviation of EVM? 🤔 Rewards - 10 $USDT to 5 winners 💵💵 Make sure you and your frens follow @aurora_india01 #AURORA #NEAR #Giveaway #Crypto https://t.co/QFksC3N25I 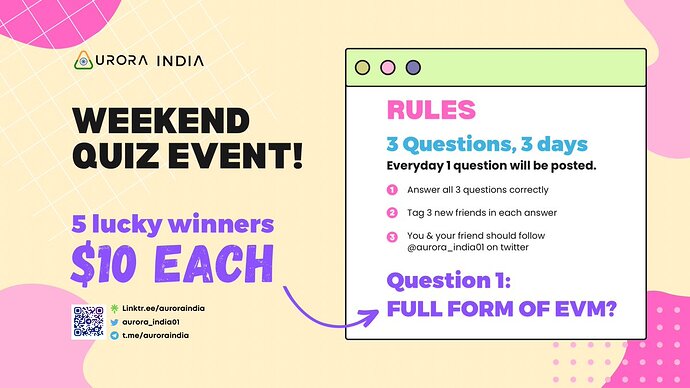 @aurora_india01
To continue the Weekend Quiz Event. Here is the 2nd Question Q2. Which #Dex on #AURORA currently holds high TVL? Rewards - 10 $USDT to 5 Winners💵 Comment your answer below tagging 3 new frens Make sure you and your frens follow @aurora_india01#AURORA #NEAR #Giveaway #Crypto https://t.co/pqCpwX164V 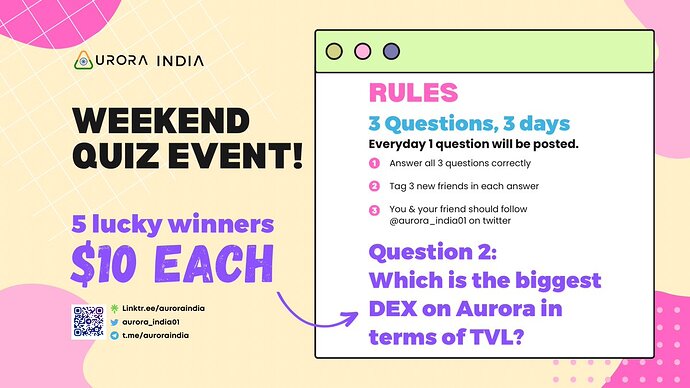 @aurora_india01
We are at the 3rd and final question to close the #Weekend_Quiz_Event. Q3. At which month and year did Aurora hit the #Mainnet? comment by tagging 3 of your new frens Rewards - 10 $USDT to 5 winners 💵 Make sure you and your frens follow@aurora_india01#AURORA #NEAR #Crypto https://t.co/rroEzhfGCq 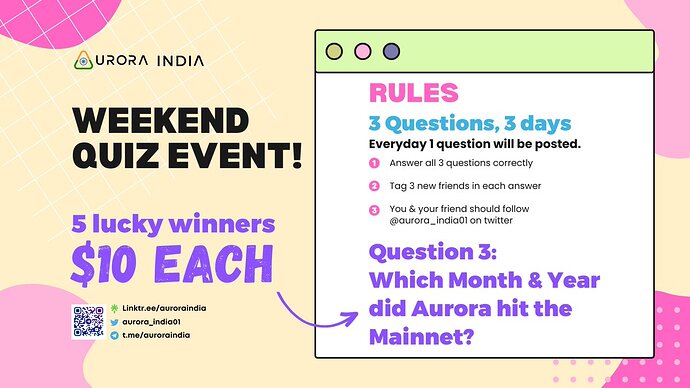 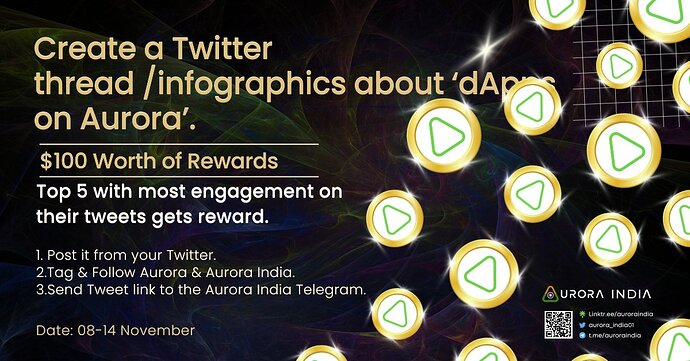 Questions about the Aurora Ecosystem were asked.

900+ messages during an hour of quiz 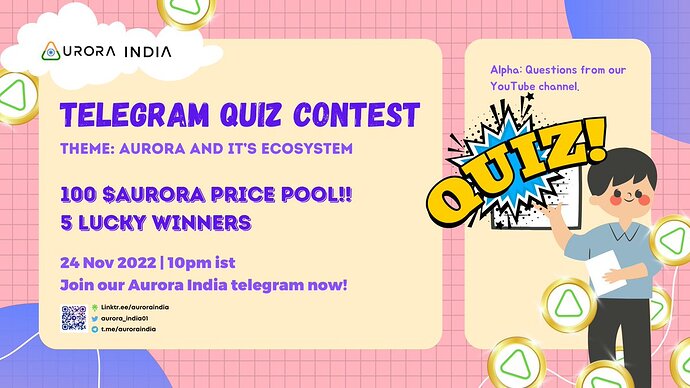 The event created hype among the Telegram community

Received 60+ entries in a few hours but unfortunately, both the matches got cancelled due to bad weather condition

@aurora_india01
#Aurora_India is calling out all the #Cricket Lovers 🥰 Predict the result of the #INDvsNZ 2nd ODI and win rewards. Rule - Join our tg t.me/auroraindia - Predict the results and post them on the chat - Add hashtag #INDvsNZ Rewards: 25 $AURORA#AURORA #NEAR https://t.co/uxL34GKYLS 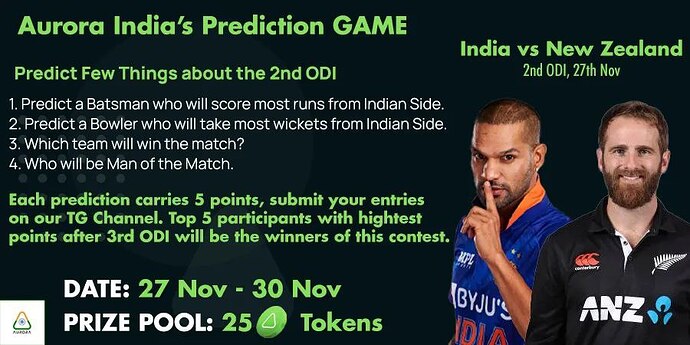 A collaboration with another community got canceled due to their inactive audience. 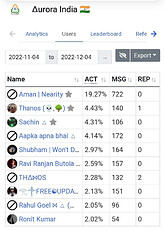 Despite the fact that we have translated over 25 articles from Hindi, we decided that focusing primarily on one language would not lead to a high level of involvement.

In response to feedback and suggestions from the core council team, we have planned to switch from Hindi translation to English content writing. We will provide top-notch articles for projects and general educational web3 material.

We have managed to make one video on “The Complete go through of Rainbow Bridge”.

We broke down the complete usage and technicality of Rainbow Bridge so that even a new web3 user can easily understand.

Here is the link to our video 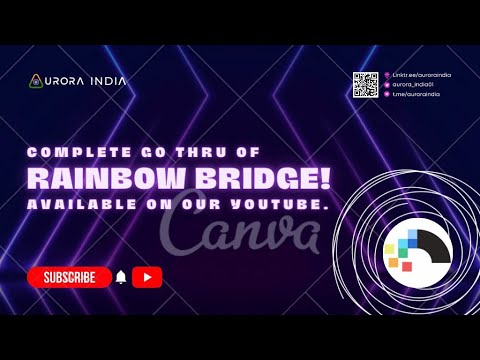 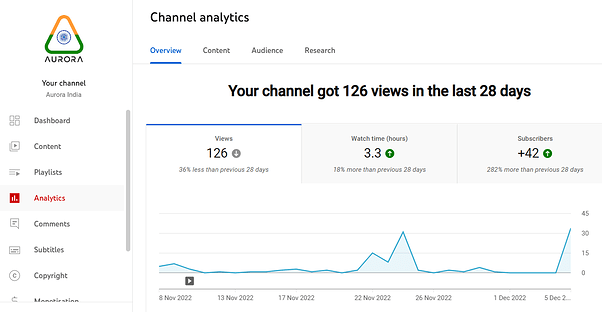 We have been sorting out techniques to pop the view on our youtube channel. Aurora India will try to move the traffic from Twitter to Youtube. As already this helped us to increase the subscribers a bit but definitely will try to increase the views as well.

We planned to be the voice of the community and help understand things on a deeper level directly from the Aurora Core team, but the team has been travelling and had been quite busy so we couldn’t find the time slot for the podcast. So we’ve tweaked the plan and taken it forward with another approach as well. We’ll be approaching project founders building on Aurora and other chains to understand things from a founder’s perspective and also try to find the slot with a core team of Aurora.

The funds are still in the DAO treasury and will be used for the upcoming podcasts.

As primarily stated, The main vision of Aurora India is not just to onboard user, but also projects and developers making them understand how Aurora is better in the technical standpoint compared to the other EVMs and Layers

Given the fact that the guild is still in its infancy & actively trying to grow, we need to put ourselves out there partnering with other groups and DAOs. The intent is to establish a connect with projects interested in expanding to Aurora and/or are looking for grants, marketing support, etc.

India Blockchain Week was one of the festivals in the Indian web3 ecosystem. It was a very exciting, informative, and insightful experience. It was great networking with other projects, developers, and industry leaders. We got a chance to meet and connect with various members from Polygon, Shardeum, Biconomy, and more projects. Although we made some good connections with these projects:

There were more projects, we’ll be in touch with them and explore how we can collaborate or onboard them on Aurora Ecosystem.

Aurora India collaborated with Unbank to educate user about Web3, Blockchain. The whole idea is to target college students.

Reason for the Aurora India to collaborate with the Unbank?

The whole idea behind is to experiment more Irl activites and expect what are the outcomes to it. This collaboration certainly helped to take Aurora India one step closer to the Indian community.

We able to add 300+ tg members in our telegram channel. We are running lot of events consecutively to keep them engaged. 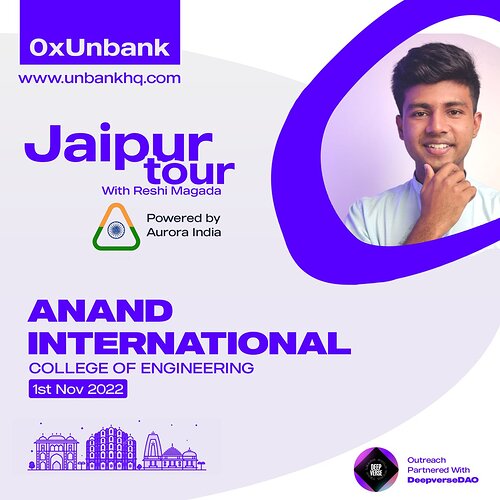 Knit Finance is a Multichain Defi, Bridge and a Liquid staking solution. Aurora India collaborated with Knit Finace for a twitter space and understood how Knit Finance works in whole. We also helped Knit Finance in applying for grants.

Cryptoforce is the fastest-growing exchange with one of the largest communities and the only exchange in India who is providing 24/7 deposits, withdrawals & support services, and conducted India’s largest event (Listed 130+ Coins in 13hrs) and most importantly giving INR pair & Withdrawals with one of the lowest trading fees in India.

Aurora India will provide constant support in trying to list Aurora to make things easy for the indians.

OG CLUB is being built with the motto of bringing people together interested in Web3 and beyond and allowing the magic of serendipity to happen.

Aurora India is talks with seek AMA and more collaborations in the future.

Due to unforeseen circumstances, the funds got depreciated but still we able to execute all the expected outcomes except the podcast and 1 youtube video. The fundings for both the activity are still in the treasury to execute in the near future.

We as a team came together to get paid less than the usual salary to accommodate all the activities that were planned.

Thank you @ell and @Alex_J for the oppurtunity.