Hello Community, Background: While we can reach all the KPIs so far with October month in Twitter, 158K impressions, 11,2K Followers (vs KPI 55K impressions monthly, 11K followers) Source: Twitter analytic and Aurora proposal [image] [image] Suddenly the incident happened, Twitter NEAR Vietnam | Aurora Vietnam was suspended due to spam (the cause might be our active AMAs twice a week with 16K impressions per each), we submitted an appeal and get recovered after a while. Solution: Taki…

Hello, Aurora community! Cc @ell @Alex_J @Vladislav_vl25 @johanga Thank you for giving us the opportunity to build the Aurora Vietnam community in Q4’22! While this week 19th-26th Dec will be the Xmas week and year-end holidays, we would like to report earlier for your feedback & planning 2023. Previous proposal Approved amount in $ $9900 Guild name: Aurora Vietnam guild Wallet: vietnamnearofficial.near Main Content: Here is our report comparing between plan & actual for Oct, Nov, …

In Jan’23, it’s the Lunar New Year season in Vietnam therefore we maintain the current activity without funding and then use the time for creating & improving our strategy in 2023:

We would like to cooperate with core Aurora Projects to support them in recruiting users, solving their biz issues, and strengthening the Aurora ecosystem in general.

From Aurora, please share with us the key direction, and critical projects to take care of to build Aurora’s unique selling points for new users.

One example that we connect with Stader, and run a Vietnam community staking program to recruit staking users in Vietnam under NEAR & Aurora VN.

For the next step, we will focus on these DEFI projects in 2023 based on funding priority:

After building the core, we will outreach to the outstanding ecosystem, and build relationships with them, having marketing activities to educate their users about Aurora projects.

One example is that we will connect on L2 ETH like Polygon, Zk, and other L1 to recruit new users and other major cryptocurrency communities in Vietnam.

Experiment with new channels such as Tiktok to allow us to reach the new blue ocean, bringing general users to Aurora ecosystems.

Besides, we keep retaining our current activities on the traditional platform (Twitter, Telegram, Medium, Youtube) to keep the community active and build relationships with all stakeholders to serve the 3 new strategies above.

Based on the strategy, we would like to propose goals and metrics for Feb-Mar’23 as follows: 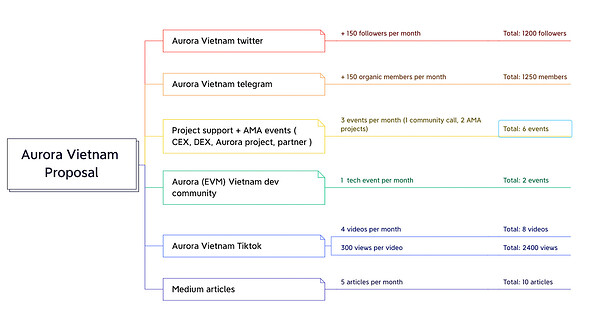 We are looking forward to your feedback & approval! @ell @Alex_J @johanga @Dk_51

Thank you for your approval! We will do our best.
Please help to transfer the fund